An infrared thermometer measures temperature based on infrared radiation, which is the radiation given off by an object at a high temperature. The infrared radiation has a slightly longer wavelength than visible light, meaning it has a shorter range than the sun’s rays, but a longer range than any other radiation we know. A good infrared thermometer will be sensitive to changes in this radiation’s wavelength as well as its intensity. The best way to specify how sensitive an instrument is to this is to look at its maximum temperature range – the highest measurement it can take (which will be negative in case of liquids) and compare that to its maximum spot ratio, which is the ratio of the maximum temperature to the lowest temperature that it can take.

Maximum temperature and minimum temperature readings are usually calibrated against specific times of day. While days of the week are generally easy to measure, it is the day of the week that is generally used for infrared thermometers. On a typical day, there is usually a large range in surface temperatures from early morning through late in the evening. For this reason, thermometers are usually calibrated against a standard 24 hour period. 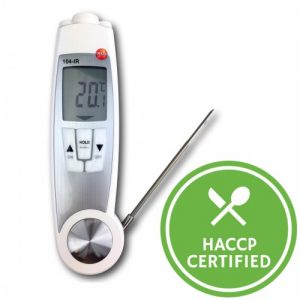 A common infrared thermometer measurement is taken when you are measuring temperatures at a particular station. Your machine will typically have a built-in distance-to-spot correlation. The larger the measurement area, the higher the correlation will be between temperature readings taken at different stations. However, this correlation can be affected by winds, clouds, and other factors, so it is not always reliable. You can also measure the average distance-to-spot temperature without a correlation by using an averaging procedure.