I went to graduate school with Ken Angielczyk, but we didn’t start collaborating until we both left. He barely works on mammals, but is a curator of fossil mammals. We work together on trying to understand paleocommunity stability through time. He has stories I’d prefer he didn’t share.

Mark Beech is a british expat living in the UAE working at ADTCA who provides much comic relief when you’ve been sorting matrix on site all day. This includes (terrible) Amer’kan jokes with an awful accent. For that, and many other reasons, he makes our UAE project go. He’s an archaeologist with a strong fondness for fish. He doesn’t return my e-mails, but he’s nice enough to store my scotch in his flat — although it’s probably gone by now.

I have spent far too much time in the field with Faysal Bibi. We have published together on things as varied as Late Miocene ratite eggshell, Eocene mimotonids, and elephant tracks. He resents all the holes I made him dig in Mongolia for paleomag samples. He’s mostly forgiven me, and lets me work with him in the United Arab Emirates. He’s been known to impersonate dead Russian authors. 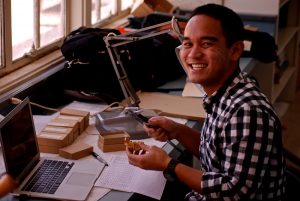 I convinced Nicholas Bumacod to do an MS project with me on rabbit skull evolution because it would be the best experience of his life (it wouldn’t) and it might help him get into dental school (probably not). He got into dental school, but still keeps working with me.

Andrew Hill studies our recent fossil ancestors. His accent makes him sound distinguished and he has a fancy named professorship; yet he and I have spent far too much time drinking beer while watching Pimp My Ride and MTV’s Cribs! He co-leads the UAE project and does anything he can to get out of picking through matrix, but thinks we don’t know this.

Li Chuankui is an emeritus professor at IVPP and knows more about Asian fossil rabbits than just about anyone. I’m very lucky to collaborate with him.

Meng Jin (with his daughter Amy) was my post-doctoral advisor. We collaborate on all things Duplicidentata; you should really check out our paper on bunny teeth. We’ve been known to drink a little too much sake at lunch and have unproductive afternoons.

I’m not good at math, but Peter Roopnarine is. He’s a good paleontologist and zoologist too; it’s all very confusing. He’s the main driver of the project on paleocommunity stability with Ken. And by main driver I mean that he coordinates us writing the same NSF grant over, and over, and over again.

The most important thing you should know about Erik Seiffert is that he’s really just a surfer who grew up on an avocado farm in Southern California. That and all of his research. We’ll be working more in Oman together, but really, I just want him to hook me up with some avocados.

Nancy Stevens and I talked about going to Oman to find fossils for a very long time. We finally did, and it turns out we were right all along. The country is lovely and the fossils are persnickety but worth it. She’s done a bunch of excellent work in Tanzania, but really, it’s the coffee plantation they set camp on I might be most envious of.

While I’ve been fortunate to briefly be in the field with Wang Yuanqing (left, with Meng Jin on the right), we largely collaborate because he’s nice enough to let me study some of the Paleogene fossils he collects in China.

I collaborate with a whole bunch of people on an NSF AToL project for mammals (see the entire list here). It’s good fun, but it helps to be well caffeinated.